Most of us might have wondered how criminal investigation agencies identify murderers with the help of their fingerprints and what the process entails. To put it simply, they look at the patterns of fingerprints. These patterns are little ridges on the end of an individual’s fingers and thumb that are arranged in a pattern of spirals and loops. Nature has evolved these patterns in such a manner that it helps humans to grip and hold onto things. Moreover, the texture prevents things from slipping and sliding that would have naturally happened if the skin was smooth.

In the early 19th century, people started to realize that no two persons have exactly the same pattern of fingerprints to the extent that it varies even in the case of identical twins. These patterns are formed during the 12th week of gestation and remain permanent throughout a person’s life. With this discovery that fingerprints are a unique method of identifying individuals, Sir Francis Galton first introduced the technique of comparing prints found at a crime scene with those of the suspect. Later, Sir Edward Henry developed the system of classifying fingerprints that was first adopted as the official system in England which eventually spread throughout the world.

Edward Henry recognized that fingerprints could be described as having three basic patterns – arches, loops and whorls. These shapes and contours were later sub-divided into eight basic patterns and are used by the FBI till today. 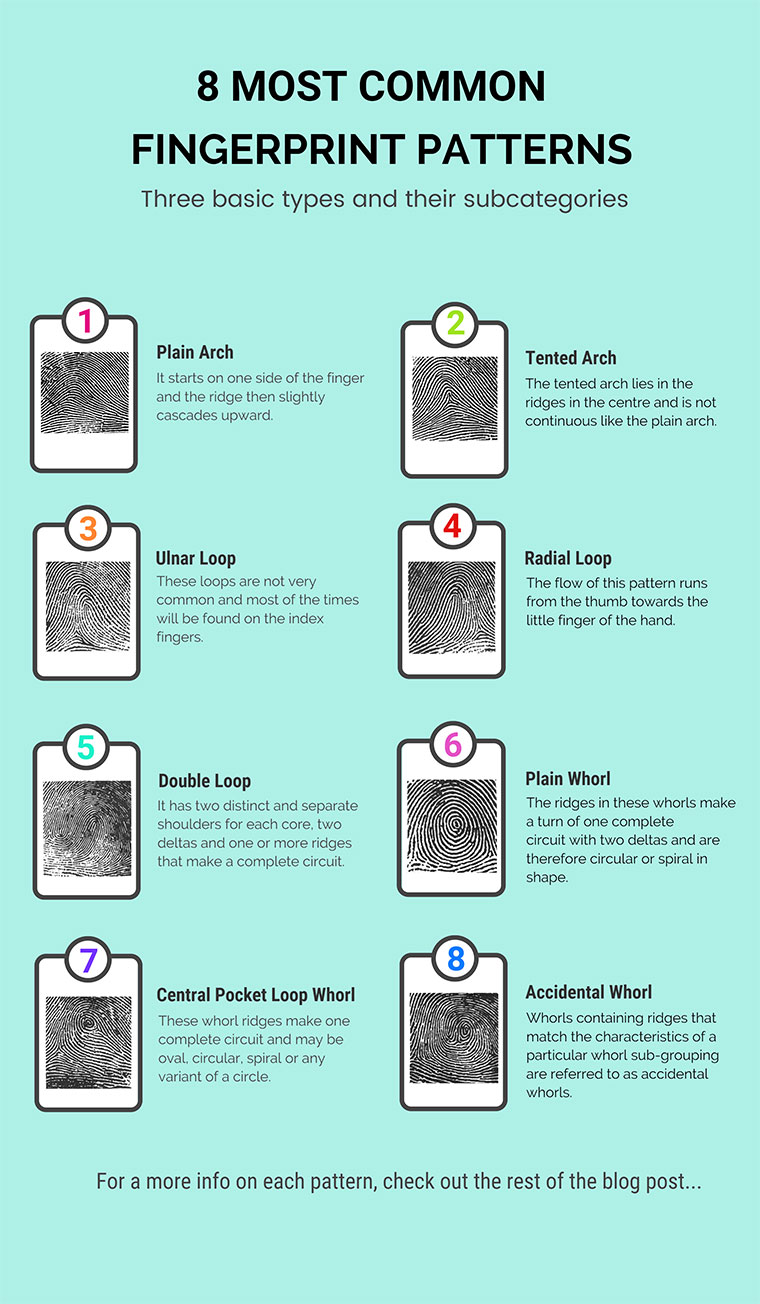 These occur in about 5% of the encountered fingerprints. The ridges of the finger run continuously from one side of the finger to the other and make no backward turn. Normally, there is no delta in an arch pattern but if it exists, there must be no re-curving ridge that intervenes between the core and delta points.

These can be seen in almost 60 to 70% of the fingerprints that are encountered. The ridges make a backward turn in loops but they do not twist. This backward turn or loop is distinguished by how the loop flows on the hand and not by how the loop flows on the card where the imprint is taken. This imprint on the fingerprint is similar to the reverse image that we see when we look at ourselves in the mirror. A loop pattern has only one delta.

These can be found in about 25 to 35% of the fingerprints that are encountered. Some of the ridges in a whorl make a turn through at least one circuit. Therefore any pattern that contains two or more deltas will be a whorl.

Subcategories of these patterns

There are two sub-types of arch patterns

In this pattern a consistency of flow can be observed. It starts on one side of the finger and the ridge then slightly cascades upward. This almost resembles a wave out on the ocean and then the arch continues its journey along the finger to the other side. The plain arch pattern is the simplest of the fingerprints to discern.

The similarity between this pattern and the plain arch is that it starts on one side of the finger and flows out to the other side in a similar pattern. However, the difference is that the tented arch lies in the ridges in the centre and is not continuous like the plain arch. They have significant up thrusts in the ridges near the middle that arrange themselves on both sides of an axis. The adjoining ridges converge towards this axis and thus appear to form tents.

There are three sub-categories of loops

These loops are named after a bone in the forearm known as radius that joins the hand on the same side as the thumb. The flow of these loops runs in the direction of the radius bone i.e. the downward slope of the radial loop is from the little finger towards the thumb of the hand. These loops are not very common and most of the times will be found on the index fingers.

There are three sub-groups of whorls

The ridges in these whorls make a turn of one complete circuit with two deltas and are therefore circular or spiral in shape. This is the simplest form of whorl and also the most common.

These whorls consist of at least one re-curving ridge or an obstruction at right angles to the line of flow with two deltas and if an imaginary line is drawn in between then no re-curving ridge within the pattern area will be touched or cut. These whorl ridges make one complete circuit and may be oval, circular, spiral or any variant of a circle.

The composition of the pattern in accidental whorl is derived from two distinct types of patterns that have at least two deltas. Therefore whorls containing ridges that match the characteristics of a particular whorl sub-grouping are referred to as accidental whorls.